For some reason about Thanksgiving I began thinking about Grandma and Mom's mincemeat. I could just taste it. I don't have their recipe, my Aunt didn't have it, but she could remember some things Grandma put in it. The funny thing is, I never really liked it back then. I just couldn't get it out of my mind.

The blessing of the computer age came to the rescue. I posted on a few forums I visit and several were kind enough to share their favorites with me. Most had suet and meat....I decided I didn't want meat...that stringy texture is what put me off before. Of course, that was after I bought a pork roast for it. We were forced to eat it for dinner and barbecue sandwiches. (not complaining at all).
I read all the recipes and used bits of several to come up with what tastes to me like I remember it. I made some tarts, ate those, but not really enough filling, make cookies (we weren't impressed with them at all) so yesterday I decided to use up the last quart and make a pie.

I was thrilled with it. It does taste like I thought it should. DH ate a piece but said that was enough....he doesn't even like raisin pie which I love. 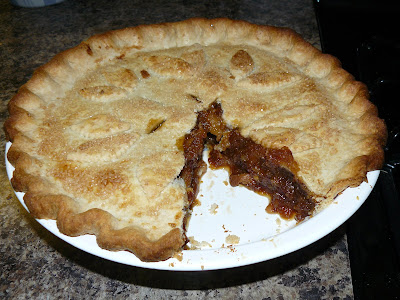 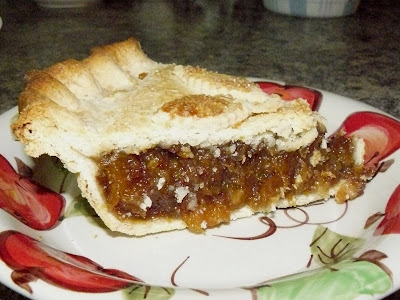