I was up very early yesterday morning,2 AM....which is ridiculous but I can't seem to do anything about it.  I survived the day but didn't get  outside at all.

Since this is to be a daily journal, many posts will be so mundane that I suggest you just skip, but I want to keep it for me......

Yesterday was such a day.  We planned to go shopping (food), but MIL called an needed DH to go with her for some banking things. He wanted me to go along and just wait  and then shop, but I felt so crappy from lack of  sleep that I begged off.

I did clean my desk and do some office type things (file personal property tax listing, pay a couple of bills, etc.) and make a couple of files up.

Next I mended a queen- size- older -than- I- am- coverlet  by stitching along one side where the stuffing was coming out.  What I really need is a duvet cover for it.  I stored away some bedding in the guest room, vacuumed and that  was about it for the day.

That doesn't include my daily internet and blog browsing.....I won't tell you how much time I spend doing that.

The cleanup shed crew came late and hauled away one load from the east sheds.  I think we should enclose one of them for a heated workshop....we will see how that comes along. DH is very non-committal about it.

This is my computer time or reading time until I fix breakfast.  This morning was biscuits and scrambled eggs and milk and coffee.  I think we are on our second pot now.

I will be milking this morning and then we will do our yesterday's errands.
I want to go to the new Price Cutter store.  They are using the NuVal system where all foods are labeled 0-99 according to nutritional value, 100 being top.  I think that is a super idea especially with boxed cereals....bet there are some really low values on that aisle!

Friday, 1/20/12.  We didn't get our errands done...I ended up get a haircut and just shopping  locally at Murfins which is on the same parking lot and the beautyshop.   DH had to stay home because they were finishing cleaning out the east sheds.  I think we are calling a halt to that project now.

Our neighbor called and the fencing contractor called with a bid on some fence between us that needs repairs, actually torn out and replaced.  We will go half which is traditional.  The bid was $850 which I though was very high, our part will be $425.  It does involve removing two trees in the fenceline.
This made me thing about inflation.......it seems that our income doesn't increase nor anyone else' s that I know but when we hire work done...they charge a very inflated price.  I wonder will it ever catch up with them and people won't hire them because they can't afford it!  Curious...

Saturday, 1/21/12.  Today would have been Mom's birthday.  I think of her every single year.
Nothing much going on.  We are having MIL out for dinner  Sunday and I baked my white cake and today.  I will do a 7-minute frosting with lots of coconut on top tomorrow,  That icing doesn't keep well.

DH called for me to take  a picture of the dog.  This was looking out the kitchen window, please ignore the very dirty window.  I had to remove the inside screen.  I will be washing this before dinner tomorrow.
The yellow cats love Biscuit. 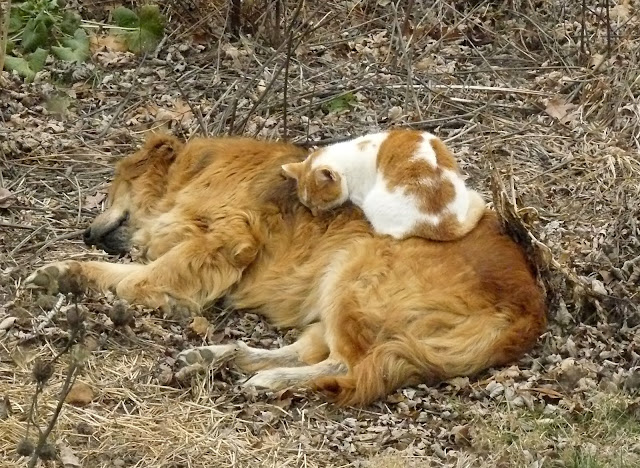 or they are using him like an electric blanket.