Several have mentioned my very early  risings......We milked for several years and  had to be up very early to get things ready to start milking at  6 am.  I think I just formed a deep pattern.  Also before that DH  worked where he left the house at 4 am to  drive to Fort Wood and  I always got up to fix his breakfast.

Then I am on Prednisone and it causes some problems with sleeping....will be off that shortly.

Next I do go to bed fairly early sometimes.  I get by on about 6 hours sleep but really need more.I have been known to take an afternoon nap but with the Prednisone, that isn't happening.

I do like being up early but things tend to go downhill rapidly from noon on.......

We didn't get much snow but it was bitterly cold and very windy.  If you look closely, you can see the snow blowing sideways to the east in front of the woods across the road (rh side of photo). 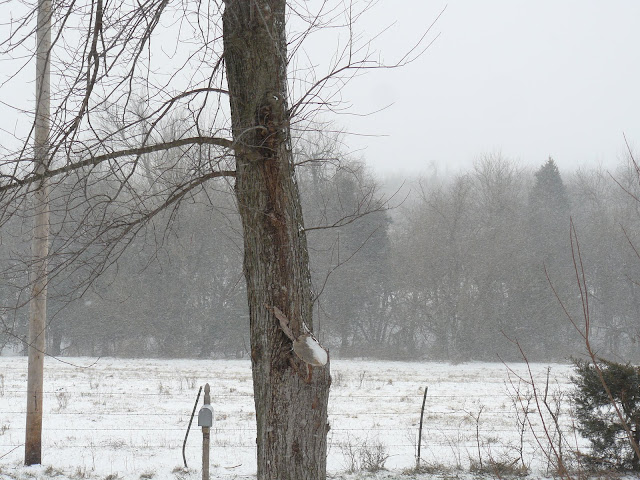 and this is the view from the porch directly across the driveway to the east, 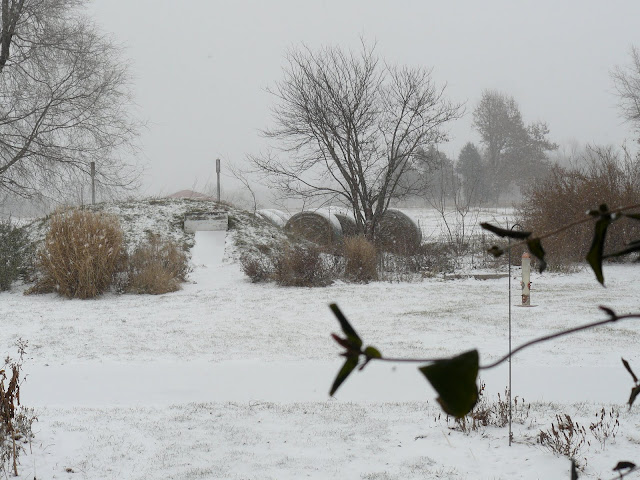 Poor DH had to feed some hay out in this!  I chose to not milk and stay  inside.  I will have to milk this morning.

Another little annoyance......DH took the old Pontiac (I would rather refer to it as the "classic" Pontiac,1990) in to exercise and on his way home, it sputtered and died!  I was right in the middle of making bread; it was about 20 minutes from baking so I had to improvise.  I should have just put it in the fridge but it would have been very cramped so I set the pans on the tile floor of the back porch and placed the turkey roast pan and lid over it.  That floor stays cold year round!  We had the car towed to the shop; $400 and a new computer later, it is running again.

Bread wasn't affected by this annoyance at all.

I sort of developed a new recipe yesterday.  I love Fettuccine Alfredo but usually use chicken.  I had a package of ground pork thawed for a couple of days and needed to use it.  I made Italian type tiny meatballs by adding salt, pepper, some crushed fennel seed (from my bronze fennel), and some oregano to the meat and then a slice of whole wheat bread crumbled up along with an egg.  Mixed it all up well and browned in olive oil with a little butter.  I cooked them completely while boiling the fettucine.  At the very last I added maybe a half cup of cream, a dash of freshly grated nutmeg,  stirred it well and then tossed the pasta in the skillet until all was coated.

We thought  it was very tasty. 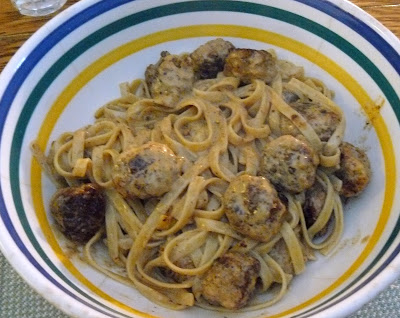 I wanted to try the coconut oil in a pie crust so I made a regular pie crust (not my huge Nathan's Never Fail recipe) and made half up in strawberry tartlets an half in my mincemeat.  It is OK, but not the flakiest crust and the bits I had to re-roll were even tough.  The slight coconut flavor was good though.

The strawberry used in these was a way of using up  leftover thawed strawberries.  I just added some extra sugar and cooked them down on the stove top for 15 minutes to make a loose jam.  I always do this with leftover fruits.  I may even like this method better than  using pectin for jam.  The rule is same amount of fruit to sugar, i.e., 4 cups fruit/4 cups sugar. 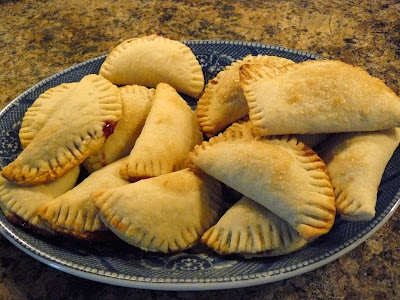 My Kindle was supposed to arrive yesterday....it did not.  It left KC on the 9th..I am wondering if bad weather up north caused the delay.  I may make some calls  to UPS today.  My sis is more excited than I am and calls daily....I think she is having a slow  week!  She keeps warning me  to call her the minute I get it.  If you have a Sis like this one, count yourself lucky!!!