First, I am having internet issues with all Gardenweb site. They are using a tracking cookie called pixel.quantserve.com. They will load almost fully according to the bar on the lower right hand side of the screen, but that is it.....sometimes it will finally load but then any movement within the site and I get the same thing.
I have tried Firefox's tools and removing and not allowing cookies....doesn't affect it at all.

So far Gardenweb is the only site affected. I checked the old computer with an old version of Windows and it is the same. I also tried using IE as browser....same.

Been a busy morning so far. I decided to build a wood fire....got that done. There is nothing better than wood heat....Ilene knows that by now!

Did my routine daily housecleaning.....very light.

Then came the chickens. I left them locked up but took out a teakettle of very warm water and mixed up a mash using their egg pellets. They just go crazy when you do this. Now the pellets are before them 24/7, but making that warm mash sends them into an eating frenzy.
I came back in and mixed up the bread and then took a walk through the two calf lots. I waited until the heifers and the bulls were in another field. I don't want to have to outrun one of the bulls.......couldn't if I wanted to! Biscuit went with me but he is no protection....if he gets scared he gets behind us.

Tomorrow's post will be pictures of the Tour of the Calf Lots and the west side view of the compound.

Came back in, punched down the dough.
My Sis called and we got into one of our long-winded wonderful conversations....I had to cut us off when the bread was ready to form into buns. Did that and while they were raising the last time, I made up the Oatmeal Craisin cookies.
I add wheat germ and should have used my ww pastry flour but forgot. They are delicious as always. 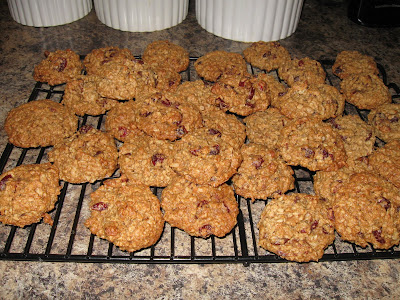 Buns are raising very slowly, Hope they turn out well. I made some changes.....
Posted by gld at 12:14 PM