It is 1.1° here this morning at 5.45AM. Thank goodness, the warm up is supposed to start today.

All seems to be going well on the farm. No frozen pipes, no new calves, just the normal aggravation of extreme cold such as DH having to break ice on the ponds daily and keep hay out for all of the various fields of cows.

I have managed to stay inside.....but will milk tomorrow morning.

I am happy to report we actually got 5 eggs. I just know it is because we fed the warm mash. This morning we will also give them a warm drink. The heated waterer just barely keeps the water above freezing.

The middle room had old, old shag carpeting in it. This room is in the middle of the house and has no windows.....you would think the architect relative who supposedly design the addition in the early 1970's would have come up with a better plan! This room was Lydias bedroom. Well, under the carpet in the closet I found an envelope that had several pictures of a young man in it. Also one with him and Lydia and her husband and a funeral picture with a flower spray on the top of the coffin. I had no idea why they were hid like that. I called Lydia and she came down immediately and told me this story:

Her father was a very strict and abusive man. He just had three daughters and he worked them like mules. Well one summer a neighbor's nephew spent the summer with them. He was a dark-haired good looking young man. They went to Lydia's family church and she first saw him there. It was love at first sight for both of them. They sat together in church and may have even occasionally held hands. Her father positively went berserk and told her she could never see him again. He knocked her off their front porch during one of his yelling sessions and she broke her finger. She told people in the church about it,but, of course, nothing was done. Such were the times back then. She and the boy were able to meet secretly a few times, but summer was soon over and he went back to town. I don't know if they were able to communicate at all after that. Well, she went on to marry Lee Dean and the boy wound up in California where he married and had two daughters.

She told me she loved Lee, but nothing like what she had felt for her first love! Tears came into her eyes telling me this story. After many years, he either called her or wrote to her asking if Lee would mind if he came out to the farm to visit them one last time. She didn't know, but he had been diagnosed with terminal cancer.
She asked Lee,who knew about him, and much to his credit he told her sure. It would be fine with him. These were the pictures taken of that visit. The casket was the man's. Lydia was notified of his death by his daughters. It seems the man had told them all about her and how he had loved her all his life! The girls put Lydia's flowers on the casket, not the families'. That was why they sent her the picture.

Lydia had hid these pictures in the closet under the carpet. I don't know why she didn't just keep them in a drawer. I am not sure her daughter knew about any of this and still don't know.

Now if that isn't a love story, I don't know what is.

It raised my approval of Lee who was a crotchety old man when we first met him by a country mile!

Fiction has nothing on real life.

Another Bird Picture (I warned you) 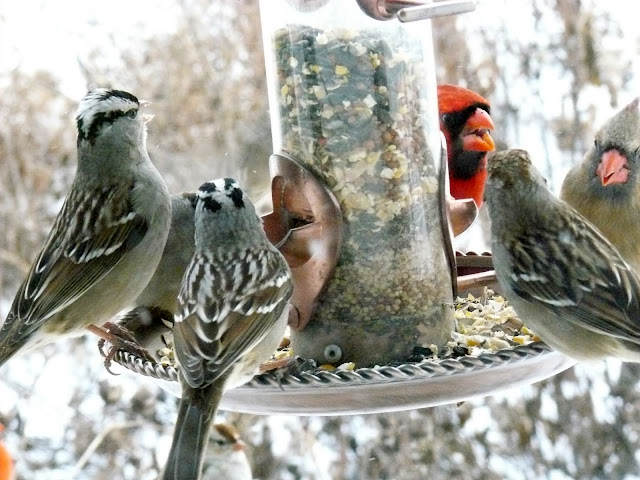