A Lucille Ball Kind of Day

I set the sprinkler for the front of the porch and went to the barn to milk.

I bottled yesterday's milk and skimmed a cup of cream and bottled it separately.

Milked Willow. The calf followed her up the ramp into the barn!....we reversed him back down the ramp. If there was room for him in the stanchion, it might be a good idea for letdown. I might move him forward into the next stanchion. Interesting thought. Of course, she(the baby) will never come up the ramp again

I checked the garden and cut a few more tall weeds from the driveway bed. The melons are growing rapidly.

This is the Green Nutmeg. Still keeping my fingers crossed the borers don't find it. 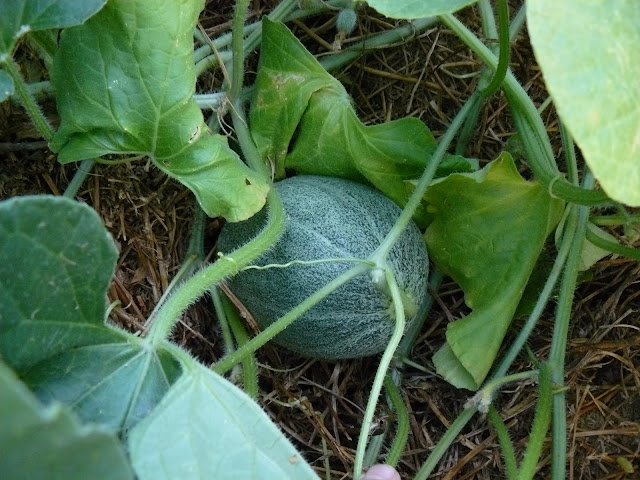 There were a few beetles on the okra so I sprayed. I also harvested enough to finally fry some. I will do that tomorrow. Pulled some over-ripe cucumbers off the vines. Still no raccoon caught.

I checked over the onions curing in the shed and found 3 or 4 that were beginning to go bad so I brought them in the house. After cleaning them off, I decided to saute them with some garlic and make a small batch of spaghetti sauce. I added a little hamburger and about ¼ pound of sausage, browned it and added some tomatoes and seasonings. I let it simmer in my electric sauce pot while I made Ilene's Hot Milk Sponge Cake.

I made a new salad of cucumbers, tomatoes and onions with poppy seed dressing. I got the idea and recipe for the dressing from Carolyn at Krazo Acres 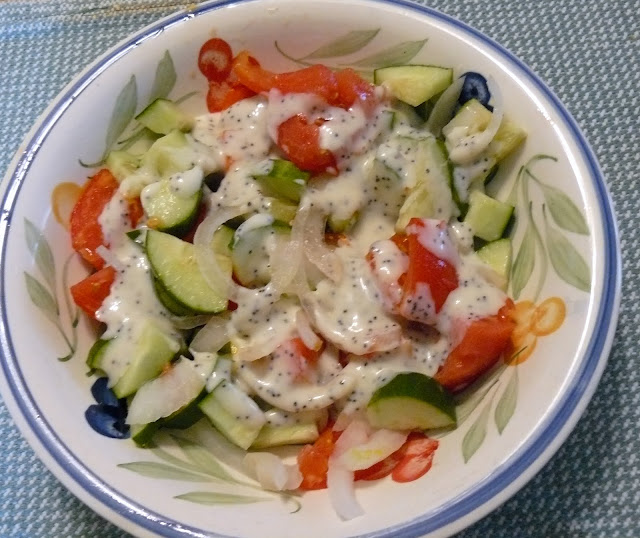 It was delicious and so simple.

Dessert was the cake with some of my blackberry topping I made for the yogurt. 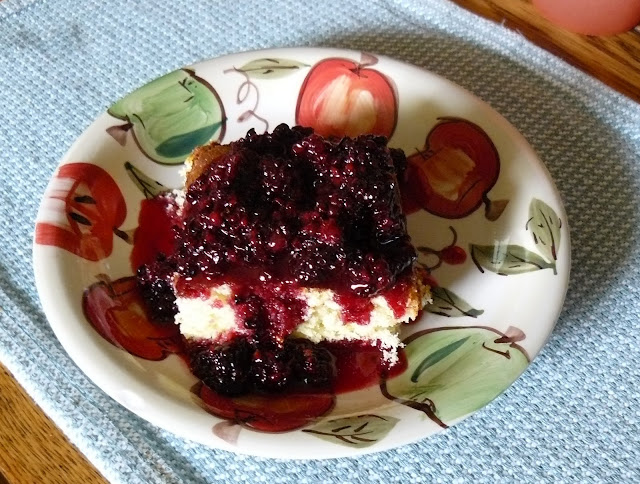 First, while making the cake the metal (note: metal is key here) measuring cup slipped out of my hand in fell into the batter. It slung the remaining sugar all over that corner of the kitchen! Second and the worst thing was the cup lodged between the mixer blade and the bowl. I turned it off immediately but it was too late. I must have bent the shaft because now it turns but makes a noise. So, I will be ordering a new mixer sooner rather than later. This was Mom's very old KA mixer that only had two speeds left, very slow and high. I have made too many batches of bread with it. I have all her attachments so I will get the KA Pro 600 series. I just cringe when I buy anything new these days.

I decided to freeze all those blueberries. I knocked a full pint off the counter top and those little lids that are so darned hard to open, flew open and spilled the berries all across the floor. Needless to say they rolled like B B's . I had DH help me pick them up one at a time. The only good thing was I had just cleaned the floor.

I have coffee in one hand and my dish of dessert in the other on my way to the computer (yes, I eat at my desk often), and the sweeper cord just grabbed my foot and I almost fell forward on my face.
I missed that one thankfully. DH was sitting at the table and he just shook his head and looked at me.

I have these kinds of days once in a while and should just quit and go back to bed when they start.

At the end of the day, I called my Sis. I knew she would understand. She has these days too! Maybe it runs in the family. She is my go-to person for sympathy and understanding plus she just bought the KA Pro 600 and I wanted to see how she liked it. She does.
Posted by gld at 6:13 AM