I told you how sometimes plans don't work out, especially where animals are concerned.

I planned to milk this morning; first I noticed Willow was bellowing....she absoutely would not let her milk down. For the uninitiated, a milk cow can come into the barn with a flat, deflated udder sometimes, but when you wash her udder and massage it and strip out some milk usually her udder will fill up and become very engorged. Well Willow has always tried to hold back her milk, I think for her calves, but generally lets down after a couple of minutes prepping her. This morning, nada! So I turned her in with the calves, udder filled right up and they nurses happily. She also could have been in heat. I am marking the calendar for 21 days ahead to check.

Now I had absolutely no excuse to not tackle that bottom freezer compartment of the trio fridge. How I hate that job. To make it more fun, I decided to make Flower Lady's Oatmeal Bread that she recently blogged about. I reasoned it would be something to look forward to after the awful cleaning job and it was.

She makes hers in a bread machine but I am happy to report I made it the traditional way and it turned out beautifully. I didn't have all the herbs so made some substitutions. I used fennel seed instead of caraway, no marjoram-used rosemary. We liked it very much. I was afraid the herbs and spices would be too strong, but they are not. I am looking forward to trying some as toast or with soup.
She has a link to the recipe on her Blog
I was able to bake it in the counter-top oven which was a plus. I did have to cover the top with foil and I almost waited too late! 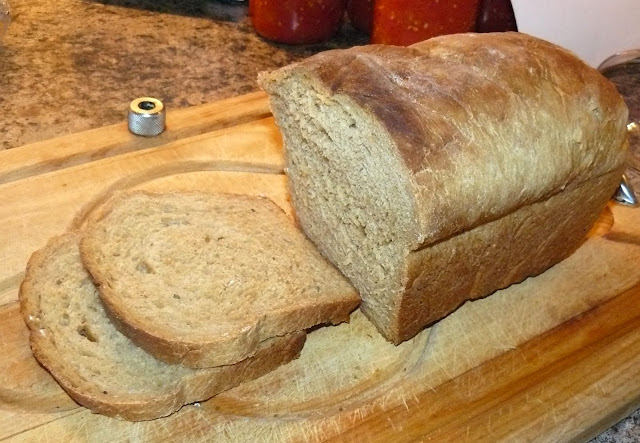 I followed Granny's Place method of listing all the things in the drawer and will put it on a spread sheet soon. I couldn't believe how much I had crammed in there. I found lunch which was a plus. We had spaghettil cheese bake and a slice of Oatmeal bread and a small cupcake for dessert. I had frozen three in a ziploc bag; found a container of cream cheese icing. They were banana so that worked out well.

I also put all frozen bread in the bottom of the drawer and moved heavy things to the upright freezer on the back porch. The hardest part of the whole ordeal is taking out the drawer and getting it back on the tracks again. You have to do that in order to wash the bottom of the freezer which always is a mess. Actually defrosting the upright is much easier. I want to do it soon and make a listing of the items.