After lunch attacked the dead nettle that is rampant this year. I cleaned the small bed in front of the smoke house. Of course, I broke off a couple of lily shoots! They are the tenderest, most brittle things and I break some every year during the clean up.

I worked my way around the foundation from the back porch to the front of the house and got most of it done.

I was happy to discover the lilies, and some tiny tips of rudbeckia and what I think is a 4-o'clock, lots of self-seeded nigella and a few other rudbeckias. The new clematis Jackmani Superba is sending up a strong shoot close to the ground. I was worried about it because I whacked it off late summer while trying to get rid of the purple honeysuckle vine! Needless to say, the honeysuckle is alive and well. I am not sure yet about the new mum. The roses are budding out and the vinca minor is blooming. I tried to kill it out of the foundation beds, but failed. I may just leave it as ground cover. At least very few weeds can get through it. All the daylilies are about through the mulched old leaves. My old snap survived the extreme cold....due to the deep snow I am sure. I may have one or two surviving foxgloves. The never self-seed for me here.

A few more daffodils are blooming each week. Some need to be moved.

DH got the trimmer started and I did hit some very heavy beds of dead nettle and cut them into the dirt.....no seeds from them.

I always feel better once I start the clean up. When I look around and see all the beds, I feel I will never get it done; once started it doesn't seem so overwhelming, 2 down and 7 more to go!

We are having a neighbor who is a tree trimmer come today if it isn't too wet to begin a long overdue project. We had lots of damaged trees due the THE ICE STORM. One is the bird feeder tree; I hate to loose it but it is an Elm and is dead on one side. Once while mowing a large sheet of bark fell off near me and scared me half to death. He will trim the other two Elms along the drive so they look much better. We are removing a hollow Silver Maple out by the road. He said to leave the other three. There is another Elm by the road that will come out. This will let more sun into the front yard which faces the south. That will be very good.

The next is what I call Glenda's Folly. We have an ancient apple tree planted west of the smokehouse. It was damaged severely by the tornado or straight wind storm we had several years ago. I has huge broken limbs hanging down, but blooms and has apples each year. I have asked lots of people what kind of apple but no one knows. I know the tree isn't sound, but he is willing to really prune it up and top some dead stuff. I will be covering a hole in the trunk with plywood, caulked in place. He said if I could keep out rain that will prolong the life of the tree. Anyway, I am probably wasting money but DH was agreeable.

There goes my new carpet! DH was worried about damage from the trees if and when they fell and I don't worry asmuch about my interior decorating as I do my outside! Next project is scraping the front of the smokehouse and painting it. I began the scraping yesterday before the weeds called to me.

I am coming out of my winter lethargy....I was beginning to get worried about me.

This two different clematis planted above and behind Annabelle hydrangea. I need to prune them this week. 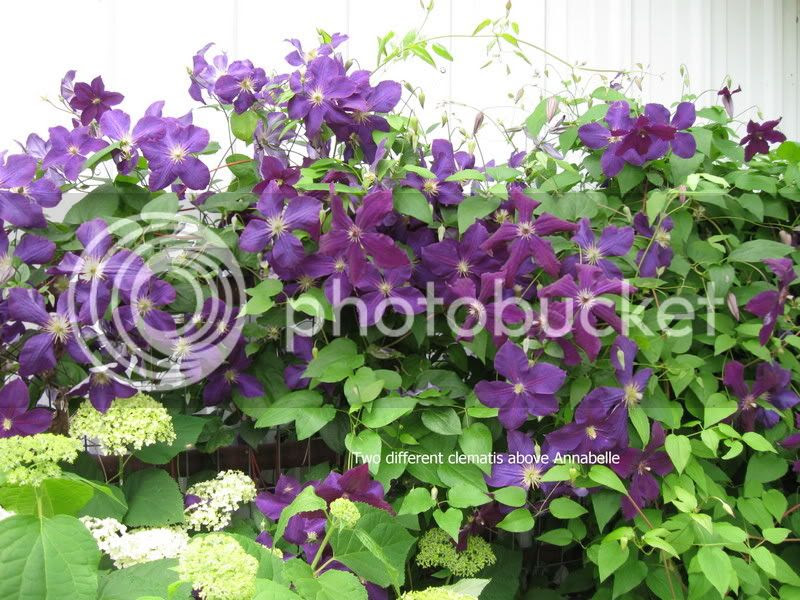