This was milking day. She withheld her milk. I could tell, down almost 3 quarts. If you do anything the least unusual, that happens. This morning I pitchforked some waste matter from the milking area and forgot my 5-gallon bucket so was delayed because of that. She punished me. Such is life with a dairy cow (mine at least).

Back to the house and I set up another ½ gallon of milk for yogurt...this time heating it first to l85° before cooling to 110° added Dannon starter, about 4 T, stirred, covered, placed on heating pad on medium, covered with towel and that was it. Very fast, easy process. Fingers crossed this time.

Turned the chickens out....and noticed the red Maple, October Glory, is red twigged and budded out.
Saw one egg already in the nest but left it for this evening. 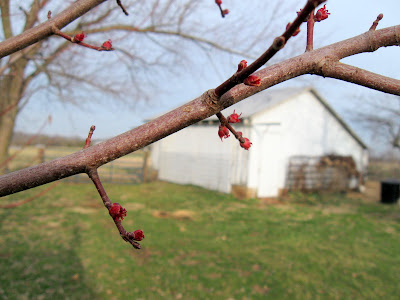 I made a chocolate cake this morning…haven’t made one in a very long time. I will freeze half of it today.

A neighbor stopped by to visit and I shared a piece with her. She is about our daughter’s age with two teenage children, both boys. We have watched them grow up. They are both very good boys…..but she shares her issues with raising them…..I think it may be more difficult in this age of electronics that when we had ours. I admire her so much. A few years ago she was overweight and had been all of her life…she joined Weight Watchers and lost all of that excess weight and has kept it off.

The reason for the visit was her youngest son was selling bulbs for the baseball team. I never mind buying flowers. I bought glads, dwarf lilies, and I think Star Gazer lilies. They will be here next month.

She told us the local market had the chicken legs and thighs we feed the dog on sale for .39 cents a pound so later we took the short trip in and picked up 4 ten pound bags. This should last us over a month. He is actually getting fat on one of these a day and his coat has never looked better.

We stopped at the car wash and I washed the Pontiac. Next trip in we will do the truck.
DH will be forced to do the insides today!

Locked up the chickens and gathered 7 eggs.

I am finished for the day. I have started a new book by Isabel Allende called Island Beneath the Sea.
I think I am going to like it very much, about slaves during the l700’s on Saint Domingo.

When I came back in the birds were in a feeding frenzy on the feeders near the house. At one time they are lined up on the porch railing waiting their turn.

I caught the Downy (I think) woodpecker on the stump at the same time.